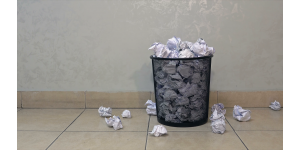 The Reality of Paper Towels - time for a disruptive technology?

You may have been affected by the recent negative press around hand dryers, the endless stream of scare stories is a result of a huge PR campaign by the some of the world's largest paper manufacturers, who also happen to be among the largest company's in the world. We are talking tens of billions in turnover for the main players.

Hand dryer sales have been increasing rapidly over the last 15 years and eating into the paper towel companies profits, mainly due to improved performance and energy efficiency. The UK has been one of the biggest adopters. Despite hand dryers being painted as 'the end of civilisation by the bacteria hyping press, the office of national statistics shows that absenteeism rates and sickness have declined by over 27% since 1993 in the UK.

We are not asserting this is purely down to hand dryers, but let's face it, if we believed the spin, the picture would quite different, we would literally be dropping dead in the millions, not just calling in sick more often. The fact is, the paper towel industry is one of the worlds largest polluter's and it has been losing revenue to a disruptive and much improved technology due to huge cost and environmental savings and the response has been a PR storm in a teacup.

Forget paper towel funded laboratory research designed to whip up a good scare story for a second and look at the reality of many locations that have paper towels.

Facilities managers up and down the country will often tell you that paper towels are the bane their lives. They end up being used as 'toilet seat barriers' and then being flushed down the toilet, creating expensive and highly unhygienic blockages, exposed human waste unable to flush because the fibers which take 100's of years to break down will not flush.

Towels fibers are designed to absorb and trap, what do you think happens to those nasty washroom microbes floating about, they end up in the fibers as this microbiological study concludes:

Ask yourself is contaminated airflow more likely to cause an issue or contaminated paper being rubbed into your hands? This needs independently evaluating of course, but really is there such a thing when big business is involved?

One thing is for sure, the absence of a means of drying hands is the worst-case scenario. Both sides, and any microbiologist would tell you that wet hands are the biggest hygiene issue. Paper towels are frequently unavailable as huge handfuls have been pulled out leaving empty dispensers or they simply haven't' been replenished, sometimes they even fail to come out properly, so you end up touching the dispenser also used by 100's of other people since their last clean in a effort to extract them. Over 5 years we have a less than 1% failure rate on hand dryers.

Paper towels often end up all over the floors, creating unsightly washrooms and transferring bacteria around.

To be honest, I actually think both means are perfectly safe in 99% of environments and this is a non-argument driven by profit. It seems neither technology is perfect when it comes to high risk, immune deficient individuals. In special care situations we must strive for something better for these people and we are working on this right now, but come on, for the vast majority, this is big business throwing its weight around.

This is just an opinion and we certainly can't claim to be impartial but hopefully you consider my comments to be quite grounded. For more insight or comment please don't hesitate to get in contact. If you have ideas on disruptive technology to finally put an end to this argument, please get in touch.
Did you know you can calculate your annual savings using our Savings Calculator based on your current paper towel usage? A Hand dryer will help you save hundreds of dollars annually.

The paper towels at some hospitals in China have been removed as they are thought to be a possibilit..

Hand dryers are obviously one of the most convenient tools in your washroom. It may sound like a str..

The Reality of Paper Towels - time for a disruptive technology?

Prosan Limited discus the shortfalls of paper towels and the negative press that hand dryers have re..